ACN student and travel course participant, Song, reflects back on his art journey to London. From classical art at the National Gallery to touring Shakespeare's Globe and seeing Kinky Boots live on the West End, art can be found around every corner in London. Read more in depth about Song's transformative and enlightening experience in London. 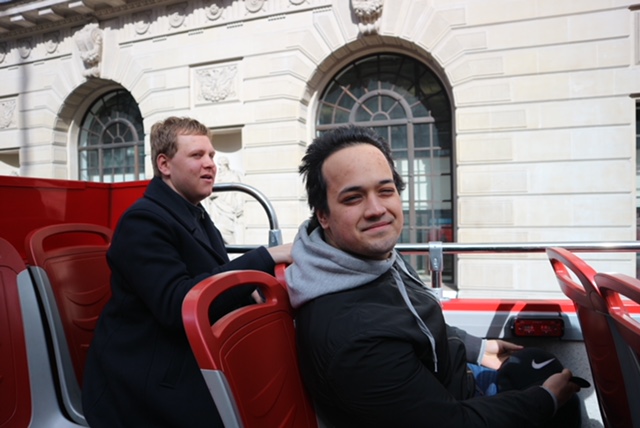 I have traveled to London many times and everytime it has been a blast. It doesn’t matter if it was for a concert, show or soccer, London has always delivered in a spectacular and unique way that only London knows how to do. However, something about this trip was different and I knew it from the minute I woke up departure day.

I took an early morning flight to get one extra day out of the trip and to explore more of London. When taking the train into London, I spent a great amount of time on Tripadvisor to help me get some ideas about what I wanted to see. Two scrolls down and I found the destination; The official James Bond Museum which is to be found a short walk from Covent Garden station. The museum was a unique experience that allowed us to see the props, scripts and original artwork for all of the Bond movies. It was also incredible to see how the artist drew up each individual scene and to see the final clip from a movie.

The rest of the day was spent just walking around looking at the people and the beautiful architecture that makes London, London. One moment you can walk down a modern street filled with heavy glass based structure like the Shard, London Aquatics Center or Olympic Stadium to the next moment you look around and see gorgeous buildings like the Soho Square Cottage and the Liberty.

Day 2 started off with a bang, no holding back and we came prepared. Okay, that might be a slight overstatement, we did after all have some struggles finding our tour bus. As soon as we found our tour bus we were rolling, literally through the streets of London. Architecture is truly an incredible form of art and London is swimming in it. From Tower Bridge to The City of London there is a new fascinating building at every corner.

The lunch at Cafe in the Crypt was truly something I had never thought I would experience. I have been to London plenty of times and I have seen the entrance to The Crypt at St Martin-in-the-Fields several times but never really thought too much about it or wondered why there is a glass cylinder next to Trafalgar Square. I am definitely happy that we went in. Being able to eat lunch under a church, in a crypt with fellow ACN students and faculty is something that I won’t forget. The National Gallery was the next stop on our arts journey. The National Gallery is unique not only in what it has internally, but also the exterior is unique. The exterior radiates with a vibe that screams spectacular. Inside we got to see amazing works of art by artist like Van Gogh. I don’t consider myself a fan of “traditional” artwork and art with heavy biblical backgrounds, but seeing these works of art definitely made me think. These artists and their ability to stir up emotions in people demand no less than true and pure respect. Past the halfway point in our art journey, Duncan and I decided to go visit the Victoria and Albert Art and Design Museum. This marked the start of something that would become a fresh breeze from what we saw at the National Museum. The V&A had all sorts of things to see within art. From Japanese samurai battle armor and Middle Eastern gigantic carpets, to church installations and original architecture models of iconic buildings from all around the world.

After the V&A, we figured that since we were on the same street, we should visit the Science Museum. Science as art? Yes, in fact what I saw in that museum was art. When you can design an airplane that looks beautiful but is practical, it is certainly evidence that science is its own form of art.

If someone told me I would find myself sitting at the Adelphi Theatre watching Kinky Boots I would have a little chuckle and say, “Yeah, I don’t think so pal”. I have never even considered the thought of watching Kinky Boots ever in my life. Having so little experience with watching live theatre and even less experience with musicals, it was hard establishing a reference. It took a lot of reflection and thinking about what I saw that night, not because of the plot of the show, but I was thinking about how blown away I was with the quality of the whole experience. The cast, lights, sound, music and the whole performance came together with the ACN crowd surrounding me in one big experience. I can with one hand on my heart, swear that Kinky Boots is one of the best live show experiences I have witnessed, and I can honestly say that I have recommended it to my friends that have scheduled trips to London. Here we go, the last day of the arts trip. We started the day off with walking over the Millennium Bridge. When crossing the bridge, several things caught my eye from the structure of the bridge itself to the Tate Modern and Shakespeare’s Globe. With the Kinky Boots experience still buzzing in my head,  visiting The Globe was the perfect time to reflect over how performance art has evolved, but still stays true to its roots. Let me digress for a minute; walking around London and taking the tube is a cultural experience in itself. You’ll easily notice how many performing artists there are in London around every corner. During this trip I have seen street performers execute tricks of Houdini, guitarist without hands and painters using the world around them as their canvas. When thinking about these street performers and the cast of Kinky Boots, there isn’t too much that separate them. When you take away the tech and strict planning the cast of Kinky boots have, then they aren’t doing something that is so different from what the guitarist at King’s Cross station is doing, performing their passion for others to see. The Globe truly made that argument stick when people would gather in the theatre to watch plays that did not require microphones or extensive amounts of lighting but it still gave the audience what they came to see.

Tate Modern, much like V&A felt like a fresh breeze. Some things I picked up on when I was looking around was that the Tate had artwork that could provoke people and that was outside the normality that people associate with art. Tate Modern pushed the limit on what people consider acceptable to display in a museum. Comparing the National Gallery and the Tate modern we can see the distinct difference in what they display but also a similarity in how they display. It is clean, easy to become indulged in the different art pieces. I loved every minute of this trip because I had the opportunity to experience London with fellow ACN students and faculty. Everyday there were countless opportunities to dive head first into the London art scene thanks to Dr. Carmichael. Being able to experience a new side of London in the world of art gave me a new idea of what London could offer other than pub traditions and soccer culture and now I love both sides. Reflecting over our busy, exciting day in the hostel with my fellow ACN students and having a few laughs over what we had seen or heard that day is probably the most valuable memory I’ll bring with me moving forward in my life.