Exploring the Connections Between Norway and Ireland on American College of Norway’s Viking Themed Travel Course to Dublin!

This past Easter break, American College of Norway students, faculty and staff traveled to Dublin, Ireland to explore the connections between Norway and Ireland on ACN's Game of Thrones: Vikings, High Kings, and the Irish Church, faculty-led travel course. 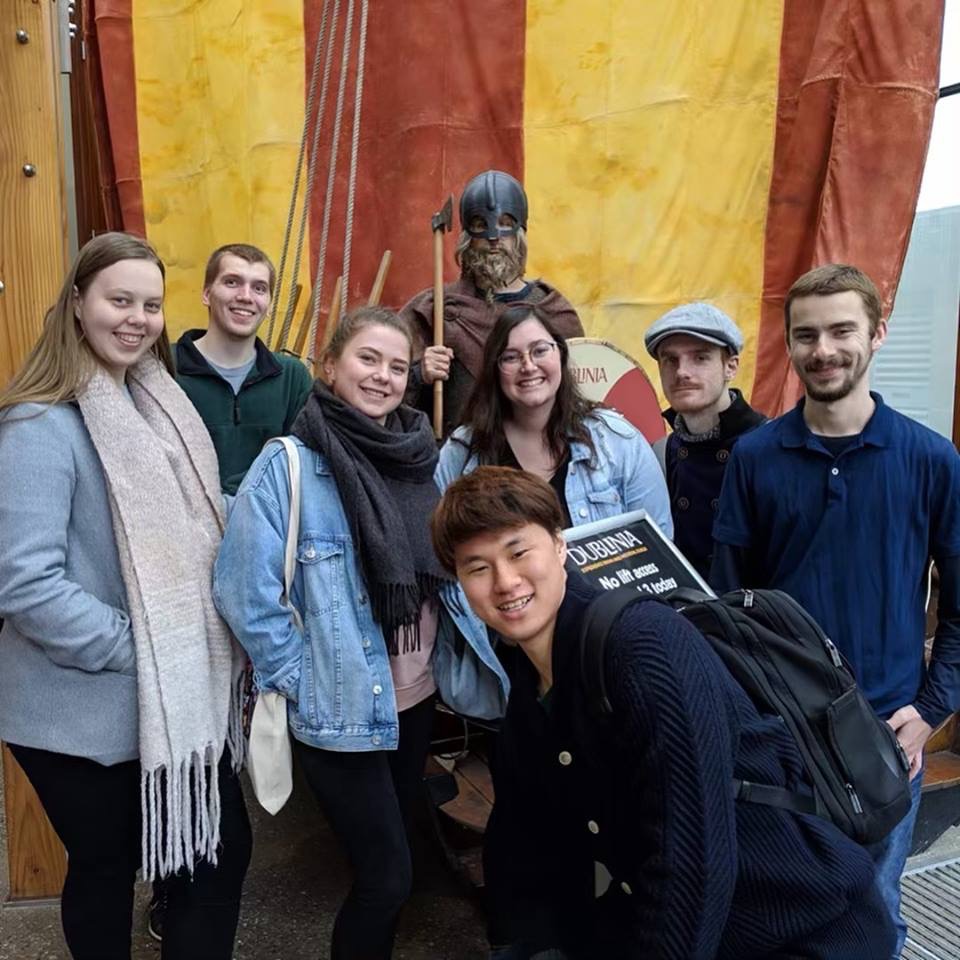 Led by Dr. Tami Carmichael from the University of North Dakota, Norwegian student, Mari Losen Bones gives a detailed account of her time on this spring’s eventful and unforgettable travel course.

On Thursday, April 11th we left from Oslo, Norway to travel to Dublin, Ireland. Our trip’s purpose was to explore the connections between Norway and Ireland, with a specific focus on the Viking age. We were also there to see sites that would help us understand the powerful “thrones” and forces that governed Ireland’s development from Viking times to the modern age. I had never been to Ireland before, and going there with someone as knowledgeable as Dr. Tami Carmichael brought so much to this experience.

The first activity I participated in was the National Museum Tour. This was a great museum with many exhibits. We saw incredible religious artifacts of Celtic & Early Christian Ireland, bog people from the Iron Age, Vikings and their place in Ireland, and more. Having Tami provide us with additional information provided us with a lot more insight. This was a great introduction to Ireland and got us all excited to learn more throughout the trip.

On the second day, we went to the Book of Kells exhibit at Trinity College. The Book of Kells is an incredible hand drawn manuscript. The details and precision that the monks executed made it look like it was printed on the pages. The museum also included Ogham writing where we could see it cut into stone. The Long Room, a huge library, was also included in this tour. It included a copy of the Proclamation of the Irish Republic. Another interesting sight to see in the Long Room was a harp, which is the oldest of its kind in Ireland.

Later that day we had a guided tour of Christ Church Cathedral and Dublinia. The cathedral was beautiful and the tour guide was a great storyteller. One thing I most prominently remember from the tour was the story of the heart of a patron saint being stolen, but then returned five years later after the thieves believed it was cursed when people close to them started dying from heart problems.

The Dublinia Viking and Medieval exhibit was a lot of fun as it was more interactive and created to make the information easy and accessible to learn about the Viking’s position in Ireland.

On Saturday we went on a day tour to Kilkenny and Wicklow. The Irish countryside was beautiful. Our stop in Glendalough was fascinating as we explored the runes of an early medieval monastic settlement. One of my favorite facts was how they had built the round tower with the door far above ground to keep intruders out and only let the ladder down for certain people. Kilkenny had the most picturesque, massive castle that was beautiful. Now I know why the call Ireland the Emerald Isle.

Sunday was our last scheduled day in Dublin that started off with a historical walking tour of Dublin from a history graduate from Trinity College. Our tour guide, Tim, was very enthusiastic and provided us with a lot of knowledge on the Vikings and the political evolution in Ireland. This was perhaps the activity where I learned the most during our trip.

After our walking tour we went to Dublin Castle. There was a lot of history there as the castle was on former Viking land, originally a medieval fortress, and has been a big representation of the British rule in Ireland.

The last activity we did together on the travel course was an Irish music pub crawl and dinner show. This was a great way to learn more about the culture of Ireland, especially since Irish culture was banned for a long time during the British rule.

This was an incredible trip not only for all the interesting history we learned, but also for the chance to experience a different culture together with great people. The mix of scheduled activities and free time gave us a memorable trip of great food, lovely people, and a new understanding of Ireland. Thank you to the American College of Norway and Dr. Tami Carmichael for arranging this travel course for us!