U.S. Presidential Debate: The Road to the White House

In preparation for this year’s election, ACN hosted a presidential debate featuring the Mayor of Moss, the U.S. Ambassador to Norway, Republicans Abroad Norway and Democrats Abroad Norway! 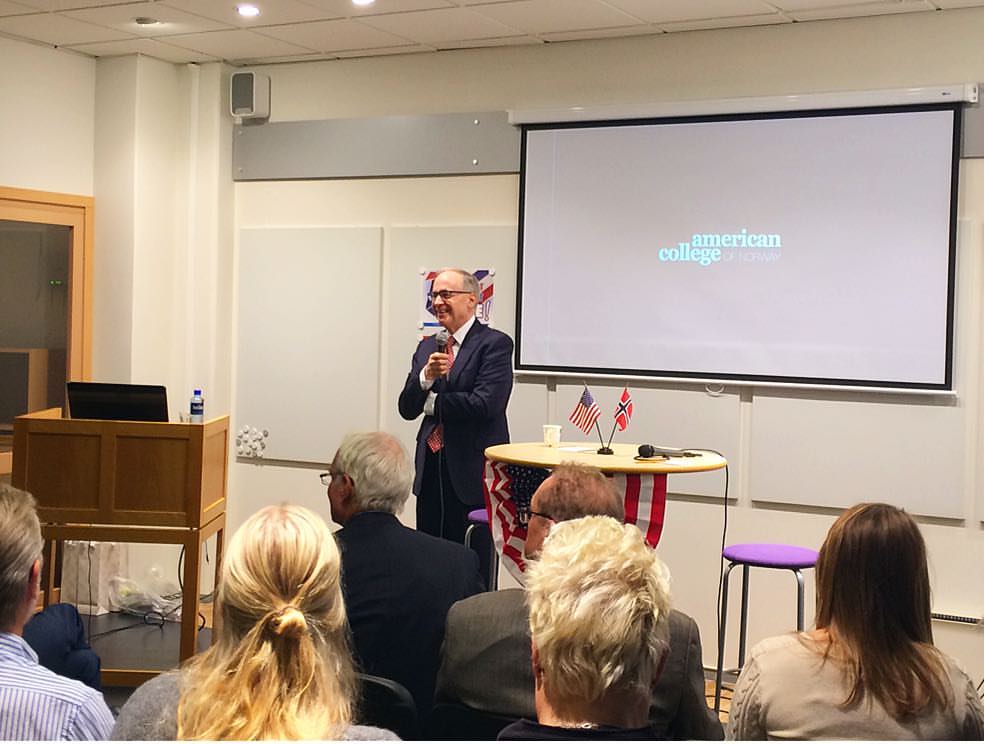 Our presidential debate, U.S. Presidential Debate: The Road to the White House, was an event ACN hosted last month as a way to get both our students and the community well versed with the U.S. electoral system. The event was also a chance for American expats in Norway to get involved in the political action!

The much anticipated event was held on October 21 at Bylab Moss with more than 70 attendees. The evening started off with a wonderful welcoming speech from the Mayor of Moss, Tage Pettersen followed by an insightful and educational presentation by the U.S. Ambassador, Samuel Heins. After setting the foundations of the U.S. electoral system, the ambassador held a Q&A session where the crowd was eager to ask various questions. After the ambassador’s presentation, both Republicans Abroad Norway and Democrats Abroad Norway presented their political platforms to the audience. To conclude the evening, both political parties held a Q&A session with questions that came directly from the audience.

The evening which was centered around great conversations about the U.S. electoral system and political parties was a tremendous success, thanks in part to our hard working ACN students! ACN’s Peace Committee worked diligently with their advisor Becky Norvang to plan, prepare and execute the event. The students helped welcome guests, delivered questions to the panel and introduced presenters. International student Bethany Larson helped introduce Samuel Heins and his impressive and extensive career in law and politics. Norwegian student Therese Petersen introduced Rick Boesch from Republicans Abroad Norway and Brad Larson from Democrats Abroad Norway. She also held a traditional American coin toss to decide which party would present first.

Bethany and Therese reflected on this exciting opportunity to get involved at ACN and felt privileged to be included in such a big event. “When I came to ACN, I never thought I would be given the opportunity to introduce the Ambassador to Norway. This experience with ACN made me appreciate the presidential system at home through all its complexity, and helped me realize the impact the presidential election has on other countries” said Bethany. Norwegian student Therese said, “The presidential debate was very educational. I learned firsthand the party platforms and could focus on my own personal biases on the election going on in my future educational destination. It was an eye opening experience and I was honored to be a part of it.” Thank you both for your great work!

We would like to thank all those who came out to participate in our presidential debate; you helped make this a memorable evening! We also cannot thank enough Tage Pettersen, Samuel Heins, Rick Boesch and Brad Larson for taking time out your busy schedules to get involved with ACN and the Moss community.

If you were unable to attend the event, or just want to relive the evening, you can watch our live stream at the following link: U.S. Presidential Debate: The Road to the White House In spring 2022, students enrolled in Creative Writing with professor Lillian Correa had the opportunity to participate in a Short Story Competition. The judges were impressed by all of the stories submitted, and finally (unanimously) settled on a winner: Isabella Burke's "Raspberry Bushes".
Les mer